Check out the new Live Preview feature on your phone or tablet.  It allows you to see a photo to scale on your wall!

Your shopping cart is empty.

Your shopping cart is empty.

Tip #1: Get Out of the Middle!
The tendency is almost universal, and sometimes even experienced photographers make this mistake.  We put the subject right in the middle of our viewfinder, start to shoot, and the photo comes out something like photo 1 in the image below.  If your photos are ever framed like this, read on and in two minutes you can improve your photos!

When we put our subject in the middle of the screen, we leave an inordinate amount of room at the top of the image, and either cut off part of the person, or make them unbearably small. Worse, we miss the chance for a lot of impact.  Think about a professional portrait of one person. Never, ever, is the person's face in the middle of the image. (if it is, it is probably an inexperienced photographer!) Instead, the eyes are usually about 2/3 the way toward the top of the image.  This is called the "rule of thirds" and it is a pretty good starting point for more interesting photos.  In your mind, imagine a grid in your viewfinder like these three images:

As a starter, take the point of greatest interest and put it at that upper 2/3 line. Note that in image 2, I have moved Billie's face to the top 2/3 line. Now her whole body is showing and it is a more pleasing composition.  But it can still be better.  The points where the lines intersect are often called "power points" because the eye is naturally drawn to these locations. So, in image 3 I have moved Billie to the upper left "power point."  Better, yes?

There are two reasons to choose the upper left "power point" for Billie's face. One is that, at least in cultures where people read left to right/top to bottom, people are most often drawn to that power point first. A second reason to move her face to that power point is, her left hand is extended, thus by moving her body to the viewer's left, we get a more pleasing composition. Below you can see the same three images with the grid removed for easier viewing.

Most people will find image three to be the most pleasing of these compositions.  But wait...some of you find yourself drawn to image one, in spite of the poor composition.  Do you know why?  For most of us, it is because the image is more "up close and personal." Humans are drawn to other people's faces.  We want to "look in their eyes."  Sometimes a full length body shot is best, but sometimes it is better to move in closer.  So, take a look at images 7 & 8 below.  Seven has the rule of thirds grid and 8 does not. Otherewise, they are identical images.

In this compostion I moved in tighter to get a closer look at Billie's face.  People generally like that in a photo of a another person.  But notice that while I did not include all of her legs, I did include her arm.  With her arm extended, if I had cut off that arm it would have been unsettling to the viewer.  So get used to looking at the extremities.  I even see shots from professional photographers who will have a full length photo with the feet or a hand cut off.  Never, ever do that! If you are not showing all of the person's body, pay attention to where you cut them off.  Develop the habit of running your eyes around the edges of your photo frame to see what you are including and excluding.  If the whole leg is not showing, cut it above the knee.  Otherwise it looks careless.

Here is a summary of the key points in framing a photo of a person:

The same principles apply to landscape images. Generally speaking, get the subject out of the middle.  If your subject includes the horizon, consider moving it to the upper or lower third.  And the same is true of other natural scenes, even when there is no horizon included. Below is a photo of Wailua Falls on Kauai, Hawaii.  Note how the falls drops through the left vertical line and both left intersections and the sun bow hits on the lower right intersection. The falls is "looking" into the empty space. 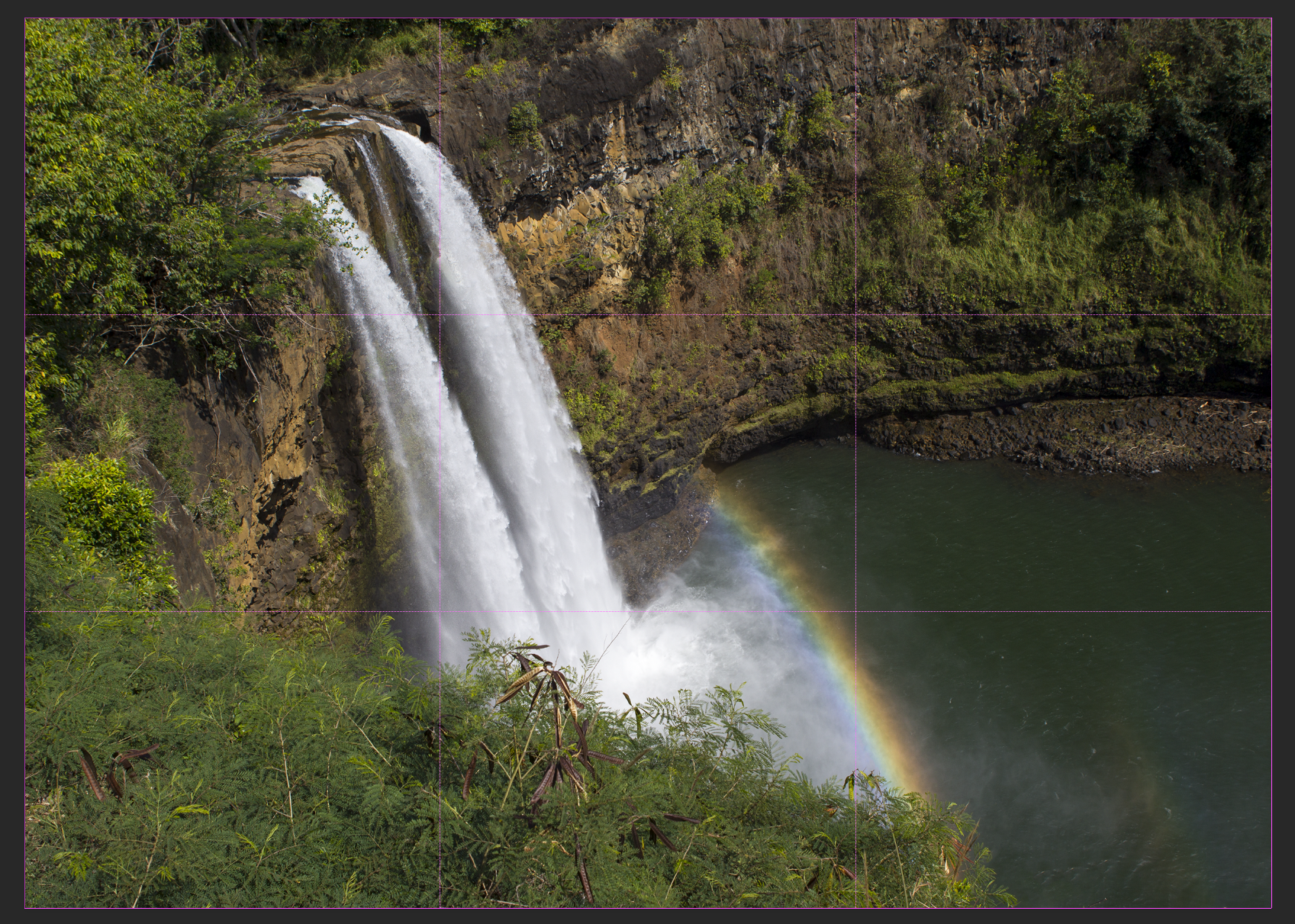 To see this image on my website click here. To learn more, look through images on the OurBeautifulWorld website and see when they come close to the rule of thirds, and when I have purposefully violated the rule. In a future lesson, I will talk about when to break the rules. In the meantime, go take some photos!

The presence of this badge signifies that this business has officially registered with the Art Storefronts Organization and has an established track record of selling art.

It also means that buyers can trust that they are buying from a legitimate business. Art sellers that conduct fraudulent activity or that receive numerous complaints from buyers will have this badge revoked. If you would like to file a complaint about this seller, please do so here.

The Art Storefronts Organization has verified that this business has provided a returns & exchanges policy for all art purchases.

We provide a lifetime warranty on materials and workmanship. In the event you are dissatisfied, call us at (502) 603-2888. Learn more at: http://www.ourbeautifulworld.com/faq/articles/quality

This website provides a secure checkout with SSL encryption.

The Art Storefronts Organization has verified that this Art Seller has published information about the archival materials used to create their products in an effort to provide transparency to buyers.

This is only visible to you because you are logged in and are authorized to manage this website. This message is not visible to other website visitors.

The above preview shows how to use the live preview on this website. The image displayed is just an example, and is not available for sale.

This means you can use the camera on your phone or tablet and superimpose any piece of art onto a wall inside of your home or business.

To use this feature, Just look for the "Live Preview AR" button when viewing any piece of art on this website!

Below, select which favorite lists you would like to save this product into.

To receive my free blogs, enter your email below and I'll email you a 20% OFF CODE right now!